The village of Ammovouno is located on the south bank of the river Ardas in the prefecture of Evros, between the villages of Kyprinos and Fylakio. In Byzantine times, it was called Simavina. In the village, there was at that time a fortress, which was one of the bastions of the Byzantine Empire.

Inside the castle of Ammovouno, after its conquest by the Ottomans, Sheikh Bedreddin was born, when his Ottoman father married the daughter of the commandant that was a Christian, and subsequently converted her to Islam, as well as all her family. The church within the castle’s enclosure was converted into a mosque.

The residents of Ammovouno are Gagauz, a Thracian tribe, Turkish-speaking though Christians and Greeks. Their origin is determined in Byzantium and they were the defenders of the northern borders of the Empire. During the Ottoman invasion, they were the last nation that was enslaved in the mainland of Balkans in 1394-1398. Until now, the local residents of Ammovouno have been trying to retain their particular civilization, a genuine Thracian civilization. 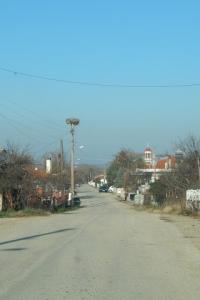