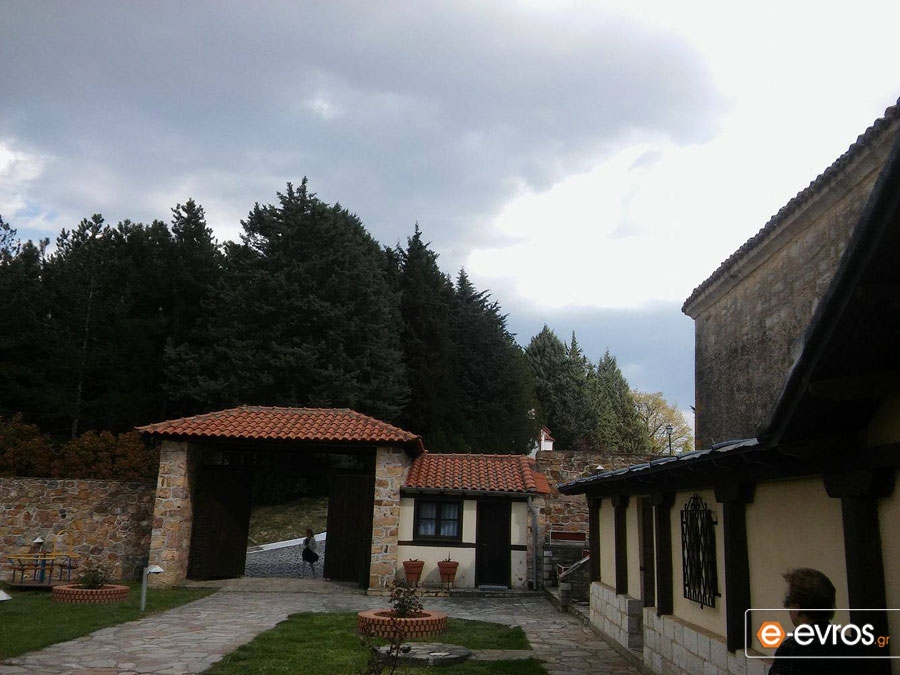 The Holy Convent of Kornofolia is build at a distance of one kilometer west of the village of Kornofolia, on top of the hill ‘’Kouri’’ and it is dedicated to the Assumption of Virgin Mary.
The main festival celebrating this date takes place on the 23rd of August, the 9 days after the Assumption. The exact date of when the monastery was build is unknown. The local tradition places the history of the convent four centuries back.

In the beginning of the 18th century it was given unofficially as a dependency to the Iviri Holy Convent in Mount Athos. During 1747, with the consent of the people in Kornofolia and Bishop Auxentios of Didimoticho (May 1744 – July 1757) taking the necessary action with the convent’s abbot Auxentios, the ownership of the Iviri convent was confirmed and made official with a decision made by the Holy Synod of the Ecumenical Patriarchate of Constantinople while Patriarch Paisios the second was in power.

After the concession of the convent, the fathers of the dominant Iviri convent brought the icon of the Panagia Portaiitisa to their dependency, a copy of the original icon which can be found in the Iviri monastery, and the copy was proven as miraculous as the original along with the right leg of Saint Charalampos.

The Greek population of the Adrianoupolis prefecture was closely connected to these two Holy heirlooms and the monastery itself. The Greek people of the area showed great devotion, respect and love to the monastery and its invaluable heirlooms. This is where they called upon at the difficult times of their enslaved lives, on the one hand to ask for the help and grace of the Virgin Mary and Saint Charalampos and on the other hand the advice and support of the spiritual people of the convent.

This is why the convent became a great religious, spiritual and national centre of the enslaved Greek populations of the area. A secret school operated in it and served as a gathering point of the men in order to train in its farmlands and compose guerilla troops against the Turks. The various abbots were willing to help and some of them became bright examples of sacrifice for their faith and country. Abbot Porfyrios for example was killed in the year 1912 by the Turkish troops.

Denomination of the original miraculous icon

The icon appeared in the open sea during the year 1004, close to the Iviri monastery.Every time the monks sailed to the icon to fetch it, the icon withdrew and they couldn’t get to it. The monks then prayed to Virgin Mary so that she would donate the icon to them.According to the legend she then appeared to Gabriel, an old hermit from the monastery, and ordered him to walk on the waves to get the icon and bring it ashore. This is indeed what happened on Tuesday, the day of Bright. The monks, carrying candles and incense, placed the icon in the catholic (the main church) of the Iviri monastery.
However, the next day the icon appeared on top of the entrance gate. It was then taken and placed in the catholic again but the icon appeared again on the gate. After this happened for the third time, the Virgin Mary appeared to monk Gabriel and commanded him to tell the abbot and the rest of the monks to leave the icon to the location that she chose, as she wanted she herself to be Guardian and Keeper (Portarisa) of the convent. Following her instructions, the monks placed the icon on the entrance gate and named her ‘’Portaitisa’’ as she wanted to be guardian of the convent. 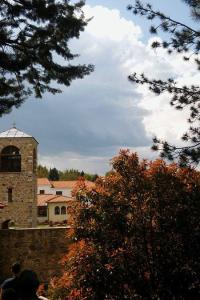 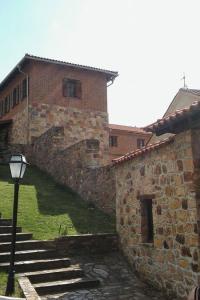 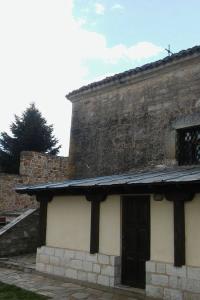 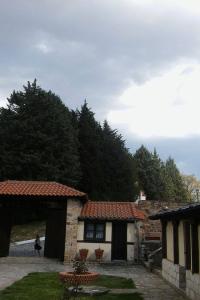