Galini in the prefecture of Evros is the first settlement from which the Ardas River after entering the Greek territory. This village is now abandoned but there is still the church of Saints Constantine and Helen, built in 1962 in place of a mosque, a spot of stunning beauty, genuine peace and tranquility, by the river and just behind the borders with Bulgaria.

Originally, Galini was a Turkish settlement and in the maps is referred to as Tsigeli, which means iron hook. The naming committee did not change the name after the population exchange, but it was done so later, in 1935, when settled in the village the first Greeks, who came from the opposite village of Milia and named their new settlement Galini.

The largest number of inhabitants (164) is observed in 1940, according to the then census. The movement of people from Milia to Galini was due to the need to crop their fields that stood on the other side. When Ardas River flooded, the crossing was impossible so they decided to finally install on the opposite site.

In Galini has been found a votive relief of the Thracian horseman of the 1st century BC, shown with a spear in his right hand, on the left is illustrated a tree with a snake wrapped around it and at the bottom there is an altar, a boar and a dog. 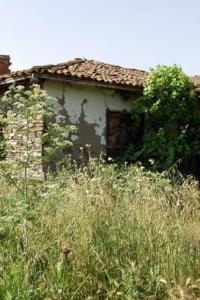